One thing I've wanted to do for as long as I can remember is jump on one of those stupid, over-priced, hook me up to cables, trampolines. Do you know what I'm talking about? They cost about $10 to jump for three minutes, depending on where you're at, and they're at almost every carnival kind of thing.

Well, despite how stupid and over-priced the thing is, I have always wanted to do it. Trampolines are  my thing & one with cables hooked to you for added jumping height? Gimme.

But, it's always been too expensive or I haven't had appropriate clothing on to jump so I haven't ever done it even though I looked like a dog with a steak dangled in front of its face every time I saw one.

Yesterday, overlooking the San Francisco Bay, I did it. I actually. freaking. did it.

I paid that $10, I jumped those three minutes and I made one of my dreams come true.

My new goal may be to never pass a trampoline without jumping. Almost as important as never hearing music without dancing. 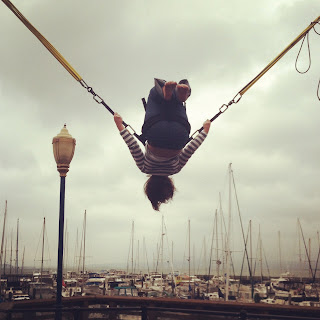 love! and your new design? amazeballs. love you!

After checking out a number of the blog posts on your web page, I truly like your technique of blogging.
I saved it to my bookmark site list and will be checking back in the near
future. Please check out my website too and let me know your opinion.
My page ; Combo Mixer Racks

Very nice article, totally what I was looking for.
Here is my website ... EMT Requirements

We stumbled over here from a different web address and thought I may as well check things out.

I like what I see so now i am following you. Look forward to
looking over your web page for a second time.
My page ... Scott J. Ferrell attorney

Thanks for your personal marvelous posting!
I really enjoyed reading it, you will be a great author.

I will make certain to bookmark your blog and will often come back in the future.
I want to encourage that you continue your great posts,
have a nice morning!
My web site - site

Hey there! I've been following your blog for a while now and finally got the bravery to go ahead and give you a shout out from Lubbock Tx! Just wanted to mention keep up the good work!
Feel free to visit my page cheap dr. dre pro headphones online

Just wish to say your article is as surprising.
The clarity to your post is simply spectacular and i could assume
you're a professional in this subject. Well together with your permission let me to snatch your feed to stay up to date with approaching post. Thank you a million and please continue the rewarding work.
Also visit my blog post - windsor chiropractor

What's up it's me, I am also visiting this website regularly, this web page is really nice and the users
are really sharing nice thoughts.
Feel free to surf my website : Newscaller Radio

At this moment I am ready to do my breakfast, when having my
breakfast coming yet again to read further news.
Also visit my webpage ; visit the up coming internet page