My parents moved into my house just a few months before I was born. The families who lived in the two houses next to us had built those houses and we were the newbies.

For those first two years, my parents didn't make friends with the neighbors & were pretty sure the husband of the family living two houses over was just a grumpy old guy. He never really talked to anyone & didn't even wave or smile. My parents figured it was best to just let him be.

Two-year-old Ali was begging her momma to read her a book but her momma was busy working so she asked her to wait a little bit. Well, little Ali didn't have any patience and was determined even back then. So, she took matters into her own hands. She marched out of the house, book in hand, walked right over to the first person she saw, the grumpy man, and asked him to read her the book. He obliged. Meanwhile, her momma freaked out, unable to find her two year old.

There I was, just sitting on the front porch with Jerry while he read me that book. My momma apologized & apologized but the man said it was okay.

And that was the beginning of a great friendship.

Not long after that, those neighbors had their first grandchild who became one of my good friends. And then they had another who I thought was my baby. They had a pool I swam in every summer & when I got older, I even had a key to it to use whenever I wanted. I spent the night at their house at times & went places with them other. They became my surrogate grandparents.

We came home from church on Sunday to a firetruck & ambulance in Jerry's driveway. He had a stroke that morning & since he always got up really early & his wife didn't get up until ten or so, they had no clue when he had the stroke. Therefore, they couldn't administer the medicine that might help reverse the damage the stroke had done since you can only give it so many hours after the stroke or there's no hope of them ever getting better.

Since that stroke, Jerry has been wheelchair bound, unable to use his arms or legs. He's had to ride in the back of a van they put a lift in & at times have a caretaker. It was virtual hell for someone who always kept a perfectly manicured yard and loved his pool & his motorcycle. All of those things were ripped away from him.

The final blow came earlier this year when he was diagnosed with lung cancer.

His cough got so bad I could hardly bear to visit because he didn't have the strength to produce a good cough and it almost seemed like he was choking.

Well, on Friday night, he stopped suffering. He went to Heaven.

They put him in Hospice last week & all week, he's just been sitting on death's doorstep. He hadn't opened his eyes since Wednesday. But then, Friday night, just moments before he took his last breath, his eyes flashed open & he looked up at the sky.

It's enough to give you chills. And a whole lot of peace.

Life on this cul-de-sac is going to be really different without Jerry & his wife, who has been with him since he was sixteen, is very, very sad but I'm glad that finally, he's in heaven. I hope they have motorcycles & pools there! 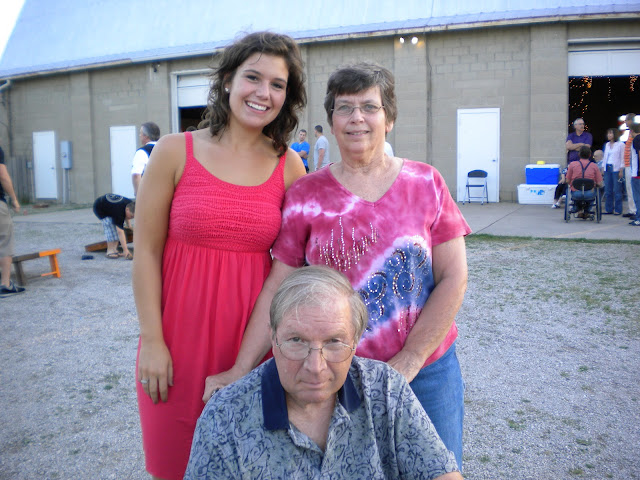 So sorry to hear of your loss. It is never easy to lose a loved one and even harder to imagine that there is a better place for them to be than here with you. My thoughts are with you and your family.

I feel very blessed that I also knew Jerry, although not as a neighbor. I was around him more when Jody and Shari first got married, than in later years. I knew him as the proud dad at the ball park, at every game Jody played, supporting his son in what he loved to do, the same way Jody is now with his own children. I dont recall ever having an actual conversation with him, he was far too interested watching his son for chit chat. He was always "into the game" Kim was always the one I actually conversed with :)I cant say I remember him talking a lot with anyone at the games but I am sure he could have told you everything about his son's play that day... the good and the bad! Ha. Your desciption of Jerry made me laugh and cry! Thank you for sharing your memories of him. I hope there are pools to lounge in, and motorcyles to cruise around in heaven, too:) Thanks for sharing your memories of him!! He will be missed!