I'm linking up with Becky over at From Mrs. To Mama today because I think she's awesome. She does this link-up every week & while sometimes I don't think I have anything to share, I'm not lacking this week. That's for sure!
Seriously .... my mom told me 10 minutes before church started on Sunday that the skirt I was wearing wasn't flattering. Of course I didn't have time to change & still make it to church in time so I just had to go in the 'unflattering' skirt. In a fit of rage I told her to either tell me that with time to change or not tell me at all ... SERIOUSLY! (I know you're gonna read this mom - I've forgiven you, but it was fitting.)
Seriously ... I really don't think about being lactose intolerant since I haven't known I was for very long and the only thing I do is not drink milk. Consequently, I ate a bunch of fro-yo the other night and then was in the fetal position in pain for almost 24 hours afterwards. Never. Again.
Seriously ... Drew & I took the dog that lives in his house, that I sort-of claim, on a walk to the Starbucks on campus the other morning because it was beautiful. I went in and got the stuff while he sat outside with Diesel and girls flocked to them (or so he said). I came out with drinks, 2 breakfast sandwiches and a piece of banana bread to share. He SERIOUSLY fed Diesel half of the banana bread and half of his breakfast sandwich. I love the dog too but dang!
Seriously ... I spent a lot of time working on a resume for an internship last night & it's not even right! It was hours of work for nothing!
Seriously .... my first class isn't until 11 today but I was wide-eyed and bushy-tailed at 7:30 so I put on clothes and came down for breakfast. And? THERE WERE PANCAKES!
If you have things you're saying SERIOUSLY?!? too and want to join the fun, link up! 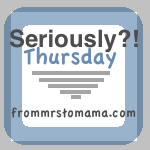 I may have just chuckled at the mom thing. Sounds JUST like my mom. Oh those moms.

Resumes are the worst! I swear I think I have mine perfect and as soon as i go to turn it on something on it is bound to be incorrect!