3 years ago, my cousin Chris & his wife Monica decided to pack up the one child they had & everything they owned & move to China to be missionaries.
While they were gone, they had another child & about a year ago they started the adoption process for a child in Ethiopia.
They decided on Ethiopia because it would be too dangerous for them to adopt from China since it required the Chinese government to look into their occupations & being a Christian missionary in China is illegal.
The first child they were going to adopt, a boy, got denied the adoption & they were heart broken but it wasn't long before they found out they'd be adopting a girl!
Chris & Monica got pictures of the baby, named her Evelyn Paulette & taught their small boys about her.
Even though they were so far away from Evelyn, they quickly fell in love & she became a part of the family without actually being in it yet.
They had visited her once once before, but when it came time to pick Evelyn up to bring her home, they decided Monica should go on her own. It's very expensive to travel from China to Ethiopia & they have two small boys at home who needed one parent to stay with them.
Just days before it was time for Monica to go by herself to pick up Evelyn & bring her home, they got a call that something was wrong with their sweet girl & doctors thought it was Spina Bifida.
The orphanage wanted to know if they still wanted Evelyn with her condition.
Chris & Monica had already very much fallen in love with & prepared for Evelyn so they followed through with the adoption very scared & praying hard.
That was in April.
In May, Chris, Monica, their two boys & Evelyn came from China to Indiana to stay for 9 weeks with our family. They try to come once a year to visit & Evelyn needed surgery to correct some things in her back. Riley Children's Hospital in Indianapolis is the perfect place to do that.
---------------------------------------------------
I have more story to tell, more about how Evelyn is an absolute miracle & so is the success of her surgery but I'll leave that for the next post.
Until then, I'll leave you with a picture of Evelyn & I at a fundraiser for her medical expenses today. 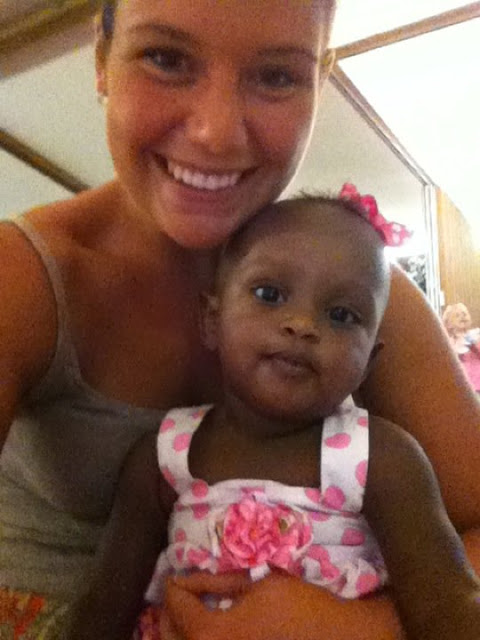 She's such a beautiful little girl! I can't wait to hear more of her beautiful story :)

She is such a cutie! Can't wait to read the next part of her story!

What a beauty. How amazing for your cousin to change these children's lives!

So sweet. How neat of your cousins!