I promised to finish the miraculous story of Evelyn's surgery & recovery & I don't back out on promises so here we go ....
--------------------------------------------------------------------------
As with any patient who's going to have a big surgery, Evelyn had many appointments prior to the big day so the doctor could discuss the plan of action with Chris & Monica.
The surgery was to be done on her spine to correct the problem caused by the Spina Bifida (what the problem was, I'm not sure, but it was small).
During one of the appointments, the doctor told C & M that she would be making 2 deep incisions in Evelyn's back in order to correct the issue. All the way up to the surgery that was the plan.
However, the day of the surgery, the doctor had a change of heart. She decided that instead, she would make one shallow incision & look around before making the deeper one & after Evelyn was asleep, that's what she did.
That's when the miracle happened.
Because the doctor made that small incision, she saw a bundle of nerves all clumped together & wrapped around Evelyn's spine. Because of the small incision, the doctor was able to untangle the nerves before continuing on with the surgery.
Why is that a miracle?
Had the doctor made that deep incision, she would've cut straight through the nerves & Evelyn would've been paralyzed for life.
Evelyn had an MRI & lots of x-rays & the nerves never showed up on any of it; the doctor just changed her mind on her first plan of action at the last second.
Not only did God spare Evelyn's life by not letting the orphanage know she had Spina Bifida before she was nearly adopted, He spared her from being paralyzed for the rest of her life too.
God is good & we know he has huge plans for little Evelyn's life.
We're so thankful to have her be part of ours. 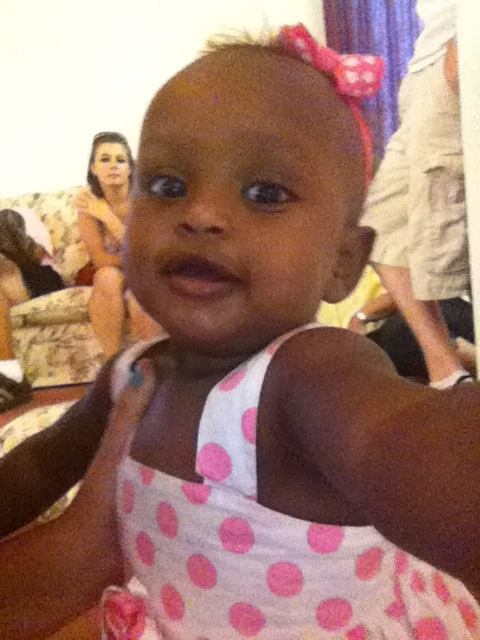 Awesome!!! God is awesome! I love this story. Thank you so much for sharing it!

Bah I just wanna steal her-- she's so stinkin cute!

That is an awesome story explaining how great God is! Give her lots of smoochs cause she looks delicious!

So this part of the story kind of gave me chills. It is so amazing when God works this way. What a precious little girl!

Ali this is so AWESOME! I seriously got goosebumps. I think we take for granted being so close to Riley when it is one of the best children's hospitals I would bet, in the country or even the world. What a blessing that little girl is, a very very cute one at that, as well as those doctors who helped to save her! Makes you realize things must happen for a reason. AND to appreciate our health and all we have! Loved this!

Amazing! She is such a beauty!