One day last summer I was sitting out by the pool & I noticed this little pimple-like thing on my knee. I thought it was weird that I would have a pimple because it was on my leg & because I don't really get acne.  Naturally, I tried to pop it but it didn't pop. It just stayed there. I didn't really think much of it because I mean whatever, stuff like that usually goes away.

But then summer ended, the pools closed up, I traded my swimsuits for jeans & the bump was still there, so I went to the pediatrician - yeah I still go to her doctor to try to figure out what the deal was. She said it was a wart & put this drippy stuff on it to make it blister over & go away.

Well, it blistered over, but it didn't go away. I decided that I didn't care about it that much since it was only one so I kept on keepin' on.

Until I saw another one.

So I went to the dermatologist & he said the same thing, they were warts, only he found like 10. What the heck?

Regretfully, I let him freeze them while my mom was like, "doesn't it just feel like you're playing in the snow without gloves?" ummmmm? HELL NO! And squeezed her hand as hard as I could.

I let him freeze the "warts" 2 separate times. Moron.


I realized something was wrong when the spots became purple.

Now, I'm no dermatologist. Heck, I'm about to write & party for a living but I know that they're not supposed to be purple. Plus, they started spreading like wildfire, so I went back to the pediatrician again & firmly told her that I was pretty sure the spots on my legs weren't warts because none of the treatments had worked & they were spreading.

They're not warts, they're Molluscums. It's a virus called Molluscum Contagiosum & it comes from little kids. Normally, adults don't get them. Well, normally, adults aren't around lots of different children as much as I am.

So there you go. The warts that are really molluscums. That are spreading. That have a lifetime of 18-24 months.

Watch your kids mamas, if you're seeing strange bumps on them, they might be molluscums & they're highly contagious. 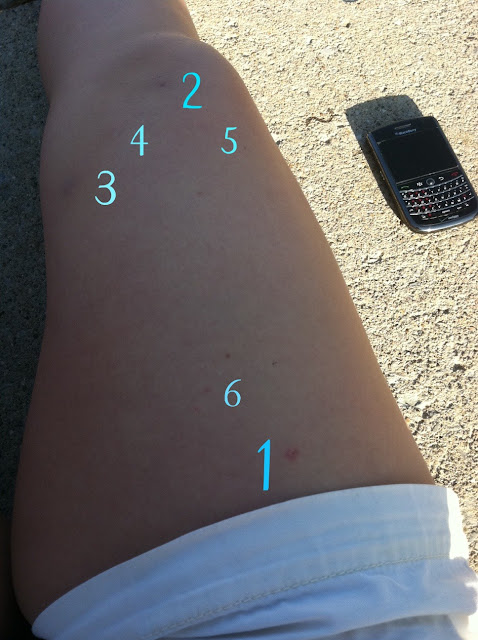 All three of my brothers had those... and have some teeny tiny scars all over to prove it. The doctor gave them a medicine to treat it though...