I got stuff to put in an Easter basket for Drew & for my mom but as would be the case for me, I got home & realized I had left all of the stuff at school.
I hadn't completed the shopping for the contents of Drew's basket yet (plus I ate all of the Reeses Eggs. Whoops.)  so I just kinda gave up on the idea & went on my merry way celebrating Easter without Easter baskets for my loves. Oh well.
But since I didn't put the stuff in Easter baskets for them I was left with some chocolate, lip plumping lip gloss & hair clips for my mom and Sour Patch Kids bunnies (his favorite) and a big pack of gum I had picked up for Drew.
So last night I remembered the things & I was like, "Hey! Drew! I have some surprises for you! Close your eyes!"
You know, because it's always mandatory that someone's eyes be closed when giving them a surprise.
Anyway, he was thrilled with the candy & started eating the Sour Patch Kids right away & that was that until he was like, "Oh! I have a present for you in my car too!"
I lost my beloved Camelback water bottle yesterday & I told him about it & he said he'd get me a new one so I figured that's what it was & I was pumped!
We ran to his car in the rain & once we got inside he said, "I don't really have a present for you, I just wanted you to walk out here with me."
I was sad but he quickly said, "Just Kidding!" and opened up the console and pulled out a watch.
It was a watch that was not in a box or a bag or anything that meant he bought it and it was ugly as hell and I know that boy. I was all "Drew, where did you get this?" and he started saying something about why did I have to know where it was from etc. etc. but I didn't let up because I knew.
"Was this your mom's that she didn't want anymore?" No.
"Was this your grandma's that she didn't want anymore?" No.
"Ok well it says Chico's on it & I know you've never been to Chico's"
"What's Chaco's?" ::ha!::  That Boy.
"Did you find it?" Laughs. "Maybe! But isn't it pretty?"
So now I have yet another thing that doesn't match a thing I own, is totally not my style, that Drew gave me, that I have to pretend that I like & wear at least once.
If you see that scar, no I don't cut, I scraped my arm on a bookshelf. 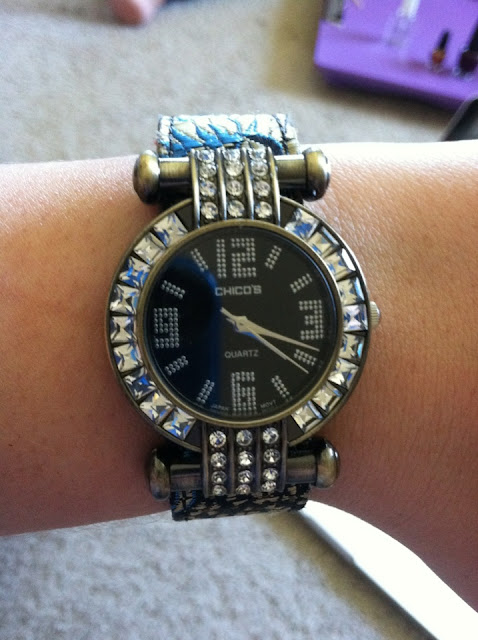 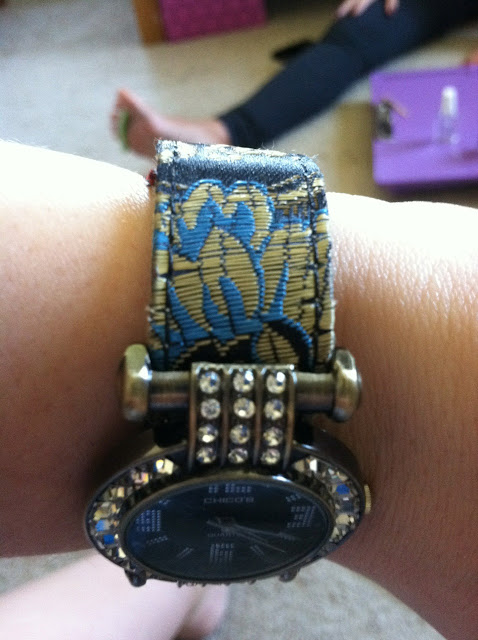 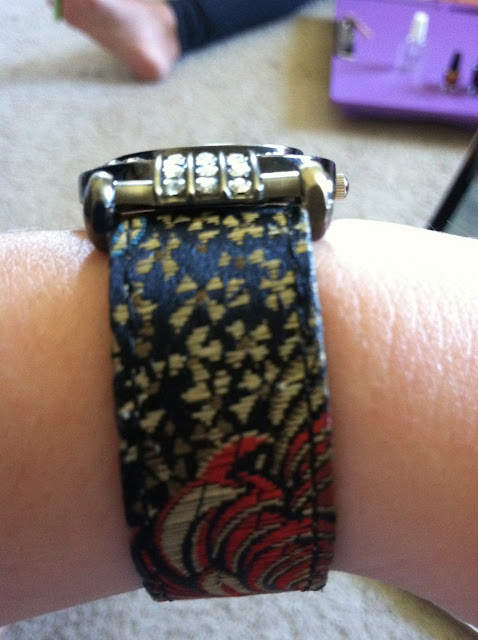 & this is just one of the reasons I seriously love this boy.
He honestly thinks it's pretty & never thought I'd know.

This post seriously just made me laugh. Even if you do think the watch is ugly, I think its sweet that he was thinking of you!

This made my day.

Oh my. This could have been written about my guy. Even though I've never received a watch, this is totally something he would do too. haha. Love that his intentions were sweet, even if the gift was a little sour! :)