Last semester, I had a professor who was hugely pregnant and also a 2-year-old, so I told her that if she needed a babysitter after the baby came, I'd be more than willing to help.

Of course, she was super excited about my offer & said that she would give me a call after the baby was born & we'd figure something out.

She called & we figured it out & now I go see Milo every Tues. & Thurs. for a few hours in the afternoon so his momma can spend time with the baby, Oliver.

Milo has had some trouble adjusting to being a big brother. His parents never really sleep trained him, in fact, I'm pretty sure he slept in their bed until the baby was born. I don't think that's necessarily wrong, but it has definitely created some sleep issues when a newborn was added into the mix.  He's mostly exhausted when I arrive at noon, as is everyone else.

Since I've been there, I've gotten him to take baths without freaking out like he did before, & now, take naps. But today, I had a really special moment with him where I realized that I'm exactly where I need to be with him. 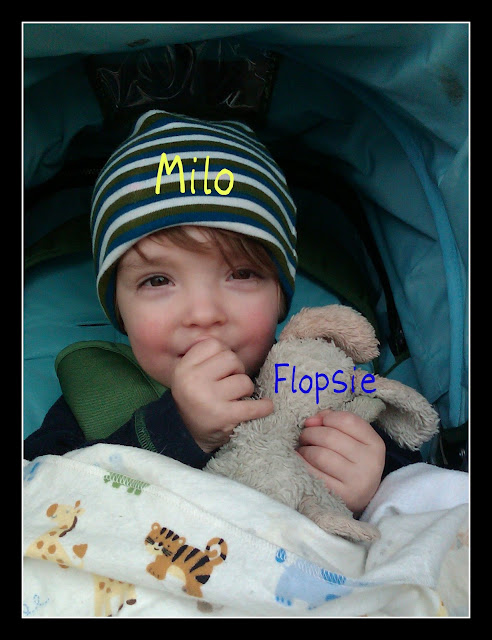 We strolled easily together down the street, silent except for the birds chirping and sounds of tools buzzing in the background.
As we strolled, I peered into the plastic window on the top of the stroller hood and saw Milo's head dipping closer and closer towards his chest until finally, his eyes were closed and he was slumped down,  dreaming about whatever 2-year-olds dream about. 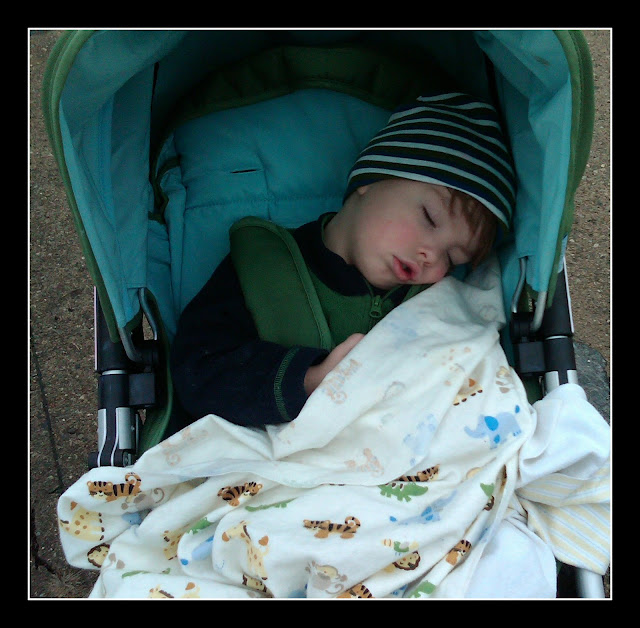 After 15 minutes of strolling around the neighborhood after he had fallen asleep, I decided he was deep enough in his dreams that I could try to take him out of the stroller.
I pushed the light blue and green bumble ride carrying dreamy little Milo into the garage and began slowly trying to undo him. First, I unsnapped him and gently lifted one arm at a time through the straps. I threw the animal clad blanket over my shoulder and picked up the 30 pound slump and Flopsie and carried them both up the stairs to his room.
There's no better feeling than a sleeping baby, no matter how big, on your shoulder.
Carefully, I krept into his room and laid him down on his big bed on the floor. His eyes opened wide. "It's okay buddy", I said, "we're just gonna take a little nap, okay?" he nodded his head in agreement as I cuddled up beside him, making sure that he felt my warmth beside him for comfort.
All of the sudden, he began doing a panicky search between us.
I knew what he was looking for.
I picked up Flopsie and put him in his arms.
Milo looked up at me, brown-eyes gleaming and nodded his head in appreciation for putting his best friend back in his arms, the ultimate comfort.
Right there, I felt so grateful for understanding him, for knowing what he wanted without him even asking.
During a time when Milo is so uncertain about this new little guy in the house who is taking time with his momma from him, and cuddles too, I offered him a little bit of understanding, a lot of love, and a lot of comfort.
As we laid there together, in the stillness of the room, Milo's eyes slowly closed again and stayed closed for long enough that I decided it would be okay for me to slowly roll off the bed & let him sleep alone.
And as I tip-toed out of the room, I realized, it's the little things baby.
Posted by Ali at 1:30 PM

I love this post! So sweet! And you are right, its the little things in life that put things in perspective, make us happy, and bring us comfort.

Ali, this is super sweet! Thanks for sharing!
-L

so so sweet! you are a GREAT sitter.. and don't be surprised if i contact you in the future!... p.s. I LOVE coming to your blog, your design ALWAYS cheers me up. so elegant too!

Awe!! Such a great comment! I'm so glad you love the design. Lauren did an awesome job. I really hope you do call me sometime. Elli is such a doll!