da-da-da-dat, dat don't kill me, can only make me stronger

Ladies and gentleman, I just finished my first 90 minute spin class!! Yes, I said 90. And spinning means indoor cycling, in case you're not aware of the term. Most importantly, I said YES! I finished it!! 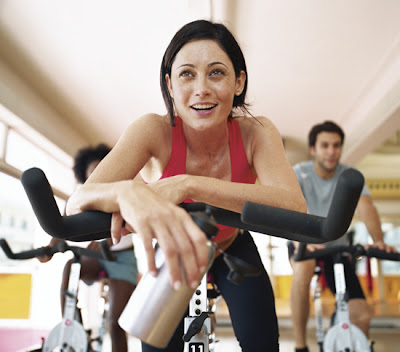 Our 90 minute class was taught my 3 different instructors who each taught for 25 minutes. The class started in the 80's with the first instructor, the 2nd instructor was the 90's, and the 3rd was now. Each instructor wore the outfit they would've worn if they were really teaching in their decade & played the music they would've played.

First, was the 80's. The instructor wore her leggings and cut off sweatshirt (although I don't know how because I was dripping in a tank & shorts) but I cant remember any of the songs she played. It was almost 2 hours ago.

Next up, was the 90's, taught by the director of Group Fitness at Butler's HRC. I knew she would be tough & she didn't disappoint, but she also had a ton of energy and was really fun, so it wasn't bad at all. She played songs like Jump Around and Barbie Girl. We did a lot of sprints and jumps in her section.

Lastly, was the present. Crazy in Love and Promiscuous  Girl were some of the songs she played. Although we did do a really long sprint pyramid and one hill, she was easier since it was the end of the class.

In between each section, we had 4 minute "power breaks" during which we could get water, use the bathroom OR join the instructors in core work, which I did.

The 90 minutes flew by and it was so much fun!! I went with 2 of my friends and we had a blast. I feel extra hot today because I got such a good workout too - Double win!!

Whether you're a beginner worker-outer or advanced, try spinning. There are classes out there anywhere from 30 minutes - 3 hours and the really great thing is that you get to control your workout. You get to add resistance or take it off, so it can be as hard or as easy as you'd like to make it. With the music blaring and sweat dripping off me, I get in the zone. While the snow was falling outside, it was July in my head. I was riding down an open road in the sunshine, just using the body God gave me.

Find a spinning class at your local gym! Take a water bottle, a headband and a hand towel and get ready to fall in love with a new workout!
Posted by Ali at 10:29 AM

i love, love, looooove spin. i taught it for a while, and i really want to get my cert so i can teach again. such an amazing and fun workout. it's even more fun to teach.

funny you would say that Lo! Im getting ready to get ACE certified, so I'll be the teacher soon! I can't wait.