The week at the beach.

So, I already told you all that I was at the beach last week. Ocean Isle Beach, NC to be exact. At one point, we had 30 family members (including me) all together in two houses on the island. It's the kind of vacation where you have so much activity & family & fun that it's irresistible for the week ... but by the end of the week, you've had so much activity & family & fun that you think you might strangle someone. Surely you know what I'm talking about & don't think I'm a brat. I'm glad to be home today. Here's a rundown of the week:
Friday: we left home about 8 a.m. and I slept until oh ... I don't know ... 12 a.m. It's my favorite part of traveling. Tons of sleeping and no feeling guilty about not being up getting stuff done. We finally arrived in South Carolina where we were stopping for the night at 11. We arrived at my great aunt & uncles to a great southern dinner of chicken & tons of vegetables straight out of the garden. Yummy!
Saturday: our week at the beach ran from Saturday to Saturday so we woke up early in the morning again to head off to the beach. Ok, have you ever sat in beach traffic? It's not fun. After a 5 hour trip that should've taken 2, we finally drove over the bridge to see this: 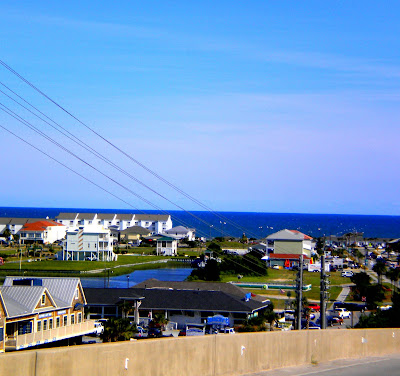 My mom has been going to the beach for at least 30 years now and she says that no matter how many times she drives over the bridge, the sight still feels just as exhilarating as it did the first time. I think I agree.
Sunday: Fourth of July!! After hanging out on the beach all day, we headed off to Calabash (ever heard of Calabash-style sea food?) for some fireworks! Before the fireworks started though, a beach band played. I loved seeing my cousins dance the shag! Oh, to be southern folk! We had a lot of fun & got cozy in our beds soon after the fireworks were over!

Monday: by Monday, I was really wishing that Wednesday would hurry up so that Drew could be at the beach with me already. My cousin Cameron arrived though and even though she woke me up from a lovely nap on the gazebo, I was super glad to see her. We went to the Boundary House for dinner & it was, as usual, ummmmazing! Best crab cakes ever. Are you getting the gist that food is a main focal point of our vacations? ... Hence the reason I gained 5 pounds in 9 days. yep!
Tuesday: I can't even really remember what we did on Tuesday but apparently, we took a bunch of pictures. Oh yeah, and I know that I went over and did a puzzle with my cousin's boyfriend Will that night and .... well, I guess that's it.

Wednesday: Such a great day! It started out with going out on the boat that our cousin Billy brought & seeing dolphins like 10 feet from it! Never had I ever seen dolphins in their natural habitat and being the ocean animal lover that I am, I was pumped! I tried really hard to get pictures but they were too fast for me. We also saw some billy goats on an island and I did get pictures of them! 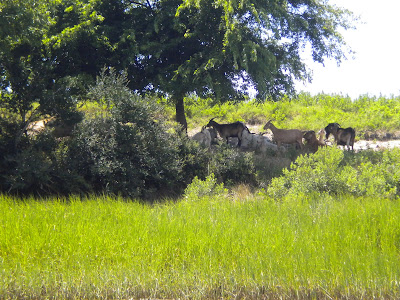 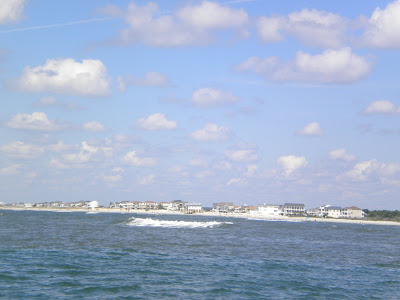 After the boat ride, it was time to go pick up Drew from the airport in Wilmington, about an hour away. I kept looking at my garmin thinking, "only 30 minutes until I see him, only 20 minutes until I see him ..." Finally I got him and we went to a battleship close by because this boy, is a history buff to say the least. I was a trooper for 1 hour and then it got hot & sweaty & boring. I did enjoy it for a little bit though.
When we got back to the island it was time for the annual Summer birthday bash. (Particularly my brother kyle & cousin aubree.) The theme was "tacky cruise ship" but obviously, some chose not to participate in the "tacky" attire. That's ok, we got some good pictures out of it!
A remake of Kyle & Aubree's 3rd &4th birthday party ... now 22 & 23. Kyle festive in his "tacky" wear. 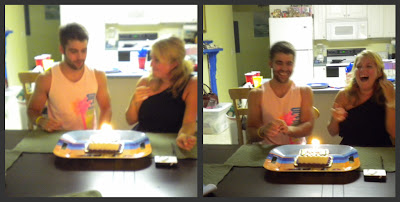 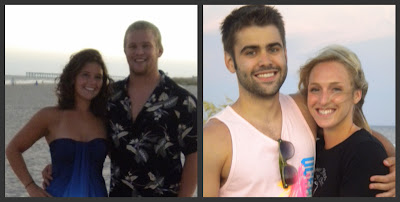 We ended the night with some guitar playing & singing by my cousins Justin & Matt & my brother. While I listened to the music & the waves I couldn't help but feel chills run down my spine and to think of how lucky I am.
Thursday: Thursday was the day that we wanted to have a late beach day. We thought we would get out there about 2 and not leave until 8. Yeah well, God had different plans! Drew & I putzed around some stores in the morning (he hung right in there with me, sweet thing) and then came back and headed to the beach because you know, we had the whole day. Well we weren't out there but 2 hours before a huge storm came in. I'm talkin hurricane winds. ... ok, maybe not really but it was raining & blowing HARD. So we headed back to Aubree & Will's condo quickly and I promptly started watching the bachelorette and we ate pizza. Finally, the rain subsided and we went & played putt putt. Easiest course ever! There were some holes where all of us got holes in ones!

Friday: Friday is such a bittersweet day when we're at the beach. It's the last day & while I'm always looking forward to going home, I still dread going back to reality & leaving the loveliness of the beach. We played on the beach all day & then went to Myrtle Beach to go to Broadway at the beach and see my cousin Matt's band play their regular Friday night gig at The Hard Rock Myrtle Beach. Drew & I ate a fabulous last beach dinner at the Key West Grill. Wowza, the island tilapia was KILL!

Saturday: We regretfully left the beach house early Saturday morning so that we could make it to the Family reunion in Mechanicsville, South Carolina by 1 o'clock. Make it we did. I love love love seeing all of Granddad's 6 brothers & sisters that are still alive and all of his family. It makes me so happy to be apart of a large legacy and I'm glad that my 83 year old Great Aunt Fannie Bell (Fannie Bell. It has quite the ring to it huh? Future daughters name? ha!) still continues to put on the annual family reunion. Granddad's oldest sister, Aunt Mildred, had brand new, 6 week old twin great grand babies at the family reunion. Of course, I was more than happy to be of service in the baby holding department. According to Drew, I could find a baby in a sea of a million people. Probably true. After the family reunion (and FINALLY finding a god forsaken red box, per the request of my sweet love Drew) we started heading home and drove until we reached Kentucky where we stopped for the night in a lovely Hampton Inn.
Fannie Bell 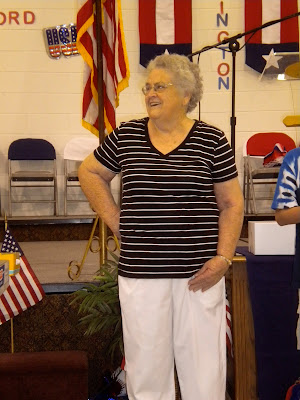 my momma & her favorite cousin & his wife 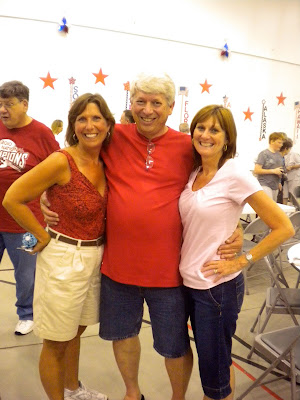 All of the goodies Aunt Fannie Bell makes to raffle off. She works all year on these! 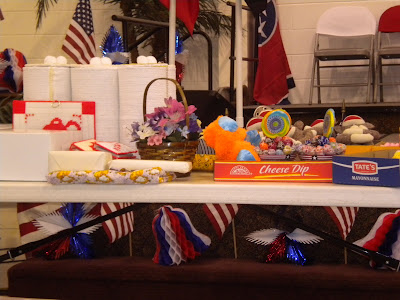 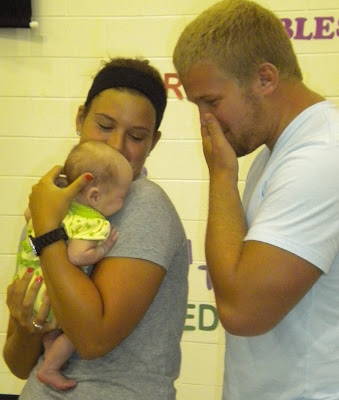 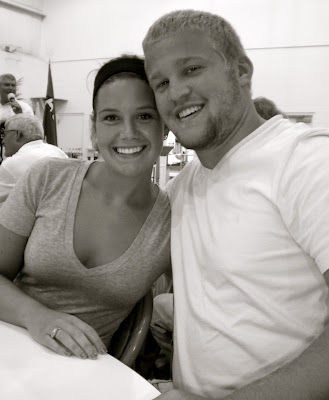 Sunday Funday: After a nice breakfast we finished the trek home. 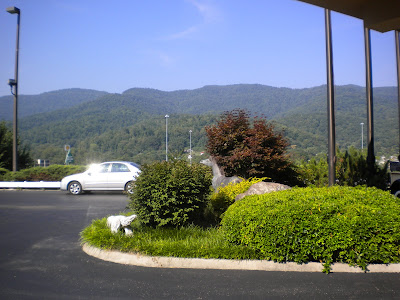 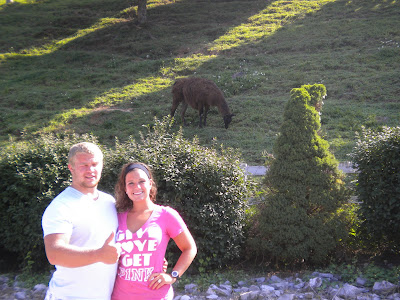 ... and now, I'm home. Said goodbye to the beach for one whole year but I guess that's okay when you have a super fabulous trip. And the best part? The house is already reserved for next years beach trip.
Just a few thank you's:
... My momma for funding & planning such an awesome trip.
... Billy & Wendy for doing the same so that their kids could come too & we could enjoy their company.
... Aubree & Will for being super fun hosts & Will specifically for being quick buds with Drew :)
... Aunt Fannie Bell for the family reunion
... Robin & Greg for sharing your boy for the week. I so loved having him.
... Drew for being a trooper and for putting up with my goofiness & my wicked witchness that comes out about 10 p.m. I love you.
Posted by Ali at 1:43 PM