Granddad has been having UTIs on the regular for months now and the nursing home kept giving him medicine while expecting it to just go away. But this week, they discovered it wasn't just a UTI, it was a bad bacterial infection that is antibiotic resistant.

My mom has been staying with him but he has been pretty much unconscious for the last few days. My defense mechanism is to downplay the situation so I just pretended he was going to bounce back from this as he has every other time - the nurses said he could fight it if he really wanted but if he was tired of fighting, he would die. Because it was going to be a really hard fight.

Well I think he's tired of fighting and I don't blame him.

He's only taking a breath once every minute or so and then wakes up scared and startled. I wish this part didn't have to be so scary for him.

I didn't expect to be that sad, really. I spent a lot of time with him when he was in the nursing home close to our house the summer before I left for college but before that, he had always lived in South Carolina so I didn't see him often. But, I'm devastated. The news hit me like a ton of bricks and I immediately started crying. I really, really didn't expect this.

For some reason though, the thought of him dying on Easter weekend during the biggest celebration in Heaven ever, makes me feel better. It makes me feel good to know that he will walk in to a big, happy party with a new body and be able to remember everyone and see my grandma and his brothers and sisters that have gone before him.

He's not gone yet and maybe he will turn around but right now it looks like he's sitting on death's doorstep just waiting to be welcomed in. 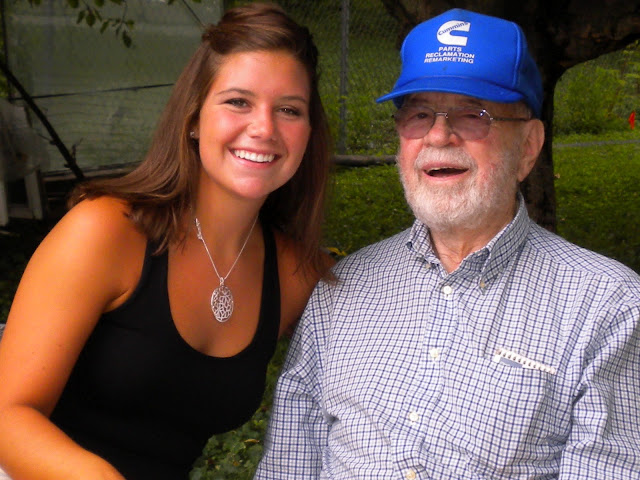 So sorry he is ill. Sending prayers to you and your family.

My grandfather passed away in February and I didn't expect it to hit me so hard. I didn't see him all too often, but had spent a lot of time with him the past 6 months. It still feels weird because it just feels like I haven't seen him in awhile, but it definitely sneaks up on me sometimes and I realize how much I miss him. You and your family are in my thoughts. I hope that Grandfather finds peace and comfort.

Sending you and your fam thoughts and prayers during this time. <3