I'll catch you new followers (whom I love) up to date, and remind you old faithfuls, that Drew & I have been dating since 8th grade.
Yep, that's right. We've made it through the transition from Middle School to High School, and then from High School to College.
October 1st, 2011 will mark the 6th Year Anniversary of the day pre-pubescent Drew asked me to be his girlfriend at his 13th birthday party. Of course, I blushed, said yes, and dreamed about the day we'd hold hands. Actually? Who am I kidding? We had def. already kissed on my trampoline because we got dared and we were both like so cool that we'd never turn down a dare. And then we bumped teeth. yeah. 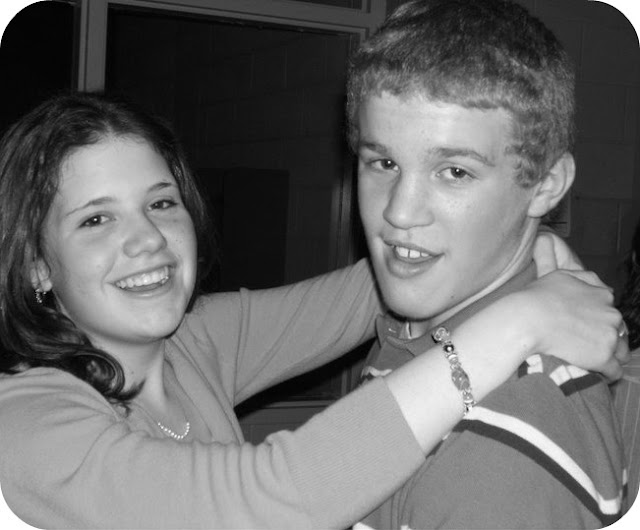 Pre-makeup for me, Pre-braces for him.
But anyway, what I'm getting at, is that Drew & I have been together for a long damn time & we're only 19. I mean, we've both dated other people once, but I'd be lying if I said we've ever been completely off. Well, he's better at it than I am, so there was one summer when he really didn't talk to me but, that only lasted a couple of months. 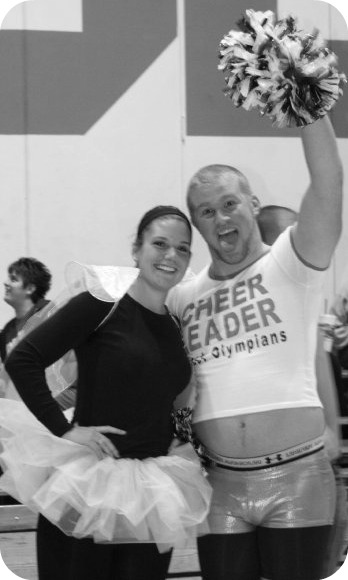 Senior year basketball game. Yeah, we dressed up, whatev.
So yeah, our relationship is comfortable & sometimes, it feels too comfortable.  Sometimes I catch myself thinking that if I were dating someone new, things would be more exciting. I wouldn't be annoyed when his car is broken down because I wouldn't know that this always happens. And I certainly wouldn't be telling him not to eat like a troll because I would probably think it's funny or maybe even hot. But dude, after 6 years, that stuff is old & it's not funny & it's sure as hell not hot.
But then days like yesterday happen.
We spent the day mixing up song lyrics & cracking each other up, eating lunch with his cute grandparents, going to the store for nothing but having fun doing it & ended it by cuddling up together for a nap. It was perfect.
And when it was time for him to go back to school, I kissed him goodbye & hopped in my car to go home, but as soon as I turned it on it died. He got in it, got it going & told me to just take it easy & try to make it home. It died a few more times but finally I got it going and was determined to make it home. He told me to call him if I need him & I took off.
I got to the end of his street, and it died again, but it immediately started back up & I was rollin.
"Alright, I can do this", I thought, "if I just stop as little as possible, I'll be fine".
But sure enough, four more houses down the street, it died again.
I decided I was just going to call AAA & have them tow it, but when I looked in my rear-view mirror, I saw his car coming down the street. He was coming to get me.
He parked his car in a driveway and came over to mine & we decided he'd push it to the next street so I wasn't on the busy road & then we'd call. Bless his heart, he pushed my 4WD Pathfinder like a fourth of a mile. 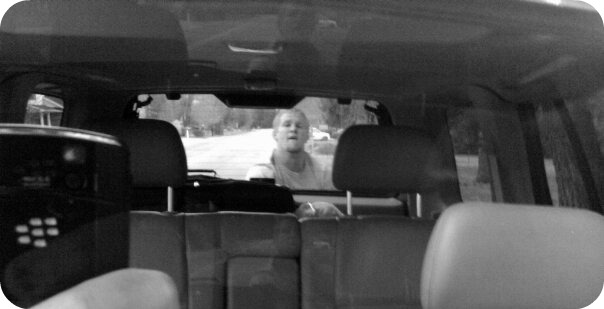 Finally, we had made it & I got out to make some calls, but first I asked him how he knew I needed help; I hadn't called him.
"I just knew" he said, "I got a feeling".
And right at that moment, I realized what an ungrateful lady I am. Comfortable isn't always bad. It means he knows exactly the way I want to cuddle and he knows that when I'm asleep, he better just let me sleep. It means he knows how to make me laugh & what to do when I cry.
It means that he knows. He just knows. & for that? I'm forever grateful.

This is so sweet, it made me want to cry for some reason. Wonderful :)

Ali This is So sweet!!!I heard he had helped you out that day!I am tearyeyed now Cous.Love you!

omg. loved this post. what a damn sweet guy/ and i know damn too well about the feelings you speak of....sometimes we do tend to fall into the comfortable stage....but little things help remind us how luvky we really are.....

and i just tped this one handed.....and elli just farted and its stinky....hehe

I met my now-husband, 16 years ago, at age 16. After a couple years in, I sometimes had those same thoughts...but I am sure glad I stuck it through. The comfort that once seemed like a burden is now the best thing ever :-)

I feel like this relates to me. I got annoyed at the bf just now for not having made a dinner decision yet (he's been "thinking" -aka looking at the new ipad- about it for an hour now. Maybe if we just started dating I'd think this was cute. Who am I kidding. It's not.

Really loved your post & super sweet of him to help you out. Thanks for sharing!

Just stumbled across your blog...and had to tell you that this story is DAH-LING! So so sweet. I've known my husband since I was a little preteen as well. Still have a huge crush on him ;)

What a sweet, sweet story. I read this post with a smile on my face the whole time. It's giving me the warm fuzzy feeling of a good love story! Thanks for sharing. :)